The Three R’s of Nursing, The Nurse Keith Show, EPS 105

We nurses deserve a lot in return for what we do. The nursing profession gives so much, and while we don’t do it for the praise and glamor, every professional wants to be seen for who they are and what they bring to the proverbial table.

Back in 2013, I wrote a blog post entitled “The Three R’s of Nursing,” and I received a lot of very positive feedback about the messages that it contained. On April 17th, 2017, I edited and published an updated version of that post, and I decided it was good fodder for a podcast episode — so here we are. 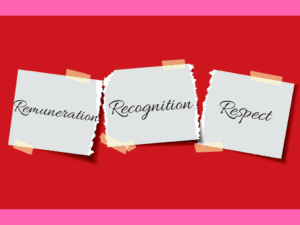 The Three R’s of Nursing

The idea of the three R’s of nursing was born from a blog post entitled, “The Nursing Class Hero.” In that post, I wrote:

Back in the day, nursing was a non-professional, relatively unskilled form of labor wherein nurses were at the beck and call of all-powerful physicians. Over a long period of time, nursing lacked any quantifiable scientific data or practices to underscore the importance of our contributions, thus we were relegated to a rather working class level of recognition, remuneration and respect.

So now you  know what the three R’s are: recognition, renumeration, and respect. And we’re going to explore them more deeply.

About recognition for nurses, I wrote:

We all want to be recognized, both for our efforts and who we are.

Even when nurses began to organize and systematize nursing science and nursing education, it was a slow road to true recognition of our important contributions to patient care.

In the 21st century, nurses are clearly in the forefront of the healthcare industry as the largest sector of the healthcare workforce. Our contributions to patient care are irrefutable, and although the public doesn’t yet fully grasp the scope of nursing practice, they recognize us as important, consistently placing their trust in us, singularly and collectively. These days, saying you’re a nurse is almost like saying you’re a saint. This may not be accurate, but it’s how the public perceives us, for better or worse.

Among other professionals–including physicians–our standing has grown exponentially, and nursing (including Advanced Practice Nursing) is recognized widely as an intrinsic aspect of healthcare that will be essential to the work of caring for an aging and growing population. That said, the AMA continues to push back against expanded roles and more autonomy for APNs. In my view, those roles will need to expand due to the increasing shortage of primary care physicians.

Here are your actionable steps for your nursing career when it comes to recognition:

When it comes to money, there are many arguments about what nurses and nursing are truly worth. In some regions of the United States, salaries have risen more visibly than in others, especially in healthcare meccas like Boston, Atlanta, and San Fransisco. In places like New Mexico (where I currently reside), salaries seem somewhat stagnant.

Remuneration is important for nurses since it’s actually a reflection of how we’re recognized, respected and valued. Salaries that don’t rise (even with increases in the general cost of living) don’t necessarily make us feel very valued, Meanwhile, mandatory overtime and increased work loads can make our salaries seem less and less attractive over time if they don’t keep pace with the reality on the ground.

We all want to be paid fairly for what we do. Personally, when I compare nurses to musicians, athletes, and movie stars, it doesn’t make sense that those who save lives, care for the dying and tend to the sick earn a mere fraction of what those who entertain us enjoy. Face it, The Rolling Stones’ profits for one performance far exceeds what many nurses make in a year.

So, we’re not flashy, sexy and in your face, but we wipe your bottom, get exposed to your infectious blood and hold your hand when you’re dying. How much is that truly worth?

Here’s a few actions to take about this aspect of your nursing career:

Finally, I wrote the following:

Ah, R-E-S-P-E-C-T. We’ve sung about, talked about it, and demanded it. And do we have it? Some will say yes and some will say no, but it’s clear that respect for nurses has risen astronomically over the decades. Remember those Victorian nurses who were vilified as loose, opium-smoking women of poor moral standing? Now we’re seen as angels and saints who (shockingly) wear teddy bear scrubs and (sadly) work double shifts on a regular basis.

As for the teddy bear scrubs, don’t get me started. I’ve written about that subject before, and while I see their appropriateness in the pediatric ward, I don’t see how teddy bears and cartoons on the Med Surg floor gain us anything but a childlike, diminutive appearance. (Picture morning rounds with the physician in a lab coat and tie, the residents in coats and nice clothes, and the nurse in scrubs covered with Sponge Bob and hearts. I wonder who looks more professional, but that’s my bias against cartoon scrubs in a unit serving adult patients. I said, don’t get me started!)

Yes, we all want respect, and we expect that it will be ours based on our education, professionalism, knowledge and incredible nursing skills. However, respect doesn’t necessarily come with the territory, but we can continue to earn it, demand it, and instill it in others by showing it to one another and ourselves.

With rampant nurse-to-nurse bullying (also known these days as “horizontal violence”), I wonder how nurses have managed to internalize so much oppression that they consistently turn on one another. This is a sad state of affairs, and I call on all nurses who want to be respected to say no to the culture of bullying. We need to stand up to bullies, call them on their b*lls#*t, and demand that bullies be removed from practice. We can respect ourselves more if we stand up to those who disrespect us.

Some action steps regarding respect:

Keeping Asking For What You Want, Nurses

If there are other “R’s” that you want, ask for them (and if they start with another letter, it’s okay, LOL!)

Consider the following conclusion from that original blog post:

Nursing is poised to experience huge growth and huge challenges as the aging of the population continues apace. Let’s bring recognition and respect to the table, and maybe remuneration will follow!