On my blog, Digital Doorway, I frequently use metaphor and stories to make my point when it comes to nurses, nursing, and healthcare. On this podcast, it’s also my mission to use the spoken word to push nurses to take action in the interest of their careers.

There are three universal stories that hold a great deal of weight for me in relationship to nurses and healthcare, and they are the stories of Hercules, Sisyphus, and Don Quixote. These are important stories in the history of humanity, and I use them again and again to illustrate various points I’m trying to make. 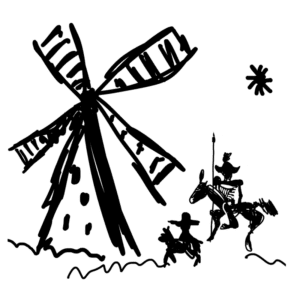 Hercules is the Roman version of the Greek story of Herakles, and we know him as a figure who was well-known for feats of strength.

We can easily describe nursing as Herculean. Nurses work under very difficult conditions that most other workers would never put up with. This can include going without food or water for up to 12 hours at a time, having no opportunities to use the restroom or take a break, and performing back-breaking transfers.

The healthcare system often forces nurses to care for more patients than is recommended, at times working shifts that last longer than 12 hours when all is said and done. Mandatory overtime and other staffing practices keep nurses on the run.

Hercules was a hero, and that story can encompass the lives and careers of nurses and their profession. Nurses perform feats of incredible physical, mental, intellectual, spiritual, and emotional strength, and we need to be recognized — and recognize ourselves — for what we do. As the backbone of the healthcare system, our contributions are innumerable and Herculean.

How have you brought heroism and Herculean strength to your nursing career? What feats of yours should be celebrated and retold as stories of inspiration for other nurses?

The Myth of Sisyphus

Some of us learned the Greek myth of Sisyphus in school. In the simplest explanation, it’s the story of a king who was punished for immoral behavior by having to roll a giant boulder up a large hill all day every day, only to have it roll back to the bottom at the end of each day. In the morning, he was forced to repeat his labors once again, and the myth was that this punishment would go on for eternity.

For nurses, many of us might be able to relate to the Sisyphean dilemma of having to push the same boulder up the very same hill each and every day, all so we can bring home a paycheck at the end of the week.

The Sisyphean nature of nursing might pertain to the difficulties of communicating with doctors and other members of the team who don’t respect us. It might also have to do with the ways in which the media misrepresent our profession. Or we may feel like Sisyphus in relation to how the public continues to misunderstand us (even though they respect and value and trust us).

Rolling that rock up that hill every day isn’t any fun, and this is where burnout and compassion fatigue eat us alive.

How has your nursing career felt like the punishment of Sisyphus? How have you been driven to the point of giving up, feeling completely burned out, or otherwise thrown to the lions?

If nursing feels like a punishment, something has to give, and it shouldn’t be your mental or physical health.

Nurses and the Story of Don Quixote

Back in December of 2015, I wrote a blog post about the Quixotic nurse. You may remember Don Quixote, a historically tragic figure who fought against imaginary monsters represented by windmills. In fact, some people simply believed him to be mentally ill.

Although the term “quixotic” (pronounced “kwik-sadik“) is often defined as exceedingly idealistic, as well as impractical and unrealistic, I prefer to consider other aspects of the term in relation to certain themes of the Quixote story, especially as it relates to nursing. Chivalry, honor, rebellion against authority, the questioning of the status quo, truth, justice, and varying visions of reality speak to me as apropos of the nursing profession in 2015 and beyond.

The quixotic nurse sees the disempowering of patients as an issue of justice and abuse of authority, and she seeks to alter common practices that undermine patients’ personal agency and self-determination.

In my book, the quixotic nurse may view the patriarchal healthcare system as a “windmill” in need of vanquishing, a corporate juggernaut that swallows nurses whole, overcharges patients and health insurance plans for unnecessary care, and otherwise exists as a slow-moving corporate ship that becomes more dysfunctional by the day.

Some may view the quixotic nurse as overly idealistic and unrealistic, a cog in the machine who simply needs to understand the so-called “reality” of healthcare economics, leave the decision-making to others, and do her job without complaining.

However, others acknowledge that it is often the quixotic individuals who make things happen and change the world. Mahatma Gandhi may well have been quixotic in his desire to overthrow British colonialism and bring political autonomy to India; Martin Luther King’s vision of racial equality was certainly seen as unrealistic and unachieveable (and some may argue it still is based on recent events); the secession of the new United States of America from the British during the 18th century was seen as foolhardy and doomed to failure; and Mother Teresa’s efforts to offer succor and compassion to the poor may have been viewed as a drop in a proverbially overflowing bucket of human suffering.

The visionary are often dismissed as misguided, but if we didn’t listen to at least some of them, the world would be a very different place indeed (perhaps devoid of electricity, overrun by communicable disease, and populated by people who believe that the flat earth is the center of the universe).

I go on in that blog post about the relationship between Florence Nightingale and Don Quixote, and how Nightingale fought against the enemies of healing long before her physician colleagues wanted to acknowledge their existence. This wasn’t pie in the sky — it was realism.

Similarly, Martin Luther King, Jr. could have been seen as a Don Quixote fighting against enemies that couldn’t be defeated.

My final entry in that blog post was thus:

Nurses, if you want to change something, consider the small steps that will get you there. If you have your own healthcare windmill that’s crying out for you to wage battle on its behalf, imagine what you need to get started. And if colleagues and naysayers tell you that it’s not possible, bear in mind the potential consequences of not acting according to your beliefs and values; silence and inaction can often be tools of complicity.

Working in nursing and healthcare is filled with moral and ethical dilemmas, whether in terms of healthcare economics, patients’ rights, labor practices, the behavior of healthcare providers, or the quality of care. We are faced with moral questions every day, some of which we feel unable to personally address or assuage.

You may feel that your desire is quixotic in the pejorative sense of the word, negating it as pie-in-the-sky or impossible to bring to fruition. Alternatively, you can also see its quixotic nature as an example of one person willing to stand up against a giant windmill/monster in need of toppling, even as others point out that the process will be long, difficult, and perilous.

Nurses, if you have a dream, step forward and make the first move to bring it into reality; you may be rebuffed, ridiculed, thwarted, and challenged. Pay no mind, and just take that first courageous step.

Florence Nightingale seized the day, changing the course of battlefield medicine and launching the science of nursing practice as we know it today. Her windmill was enormous, and she simultaneously fought against a much more deeply ingrained form of medical and societal patriarchy than the average 21st-century female nurse must now face. How the odds were stacked against an unmarried non-professional woman from Victorian England.

Impractical and idealistic? Maybe. Pie-in-the-sky and impossible? Perhaps. Worth an earnest, heartfelt attempt? By all means.