Violence Against Nurses — Our Own #MeToo Moment | The Nurse Keith Show, EPS 139

On December 18, 2017, I published a blog post based on recent reports that a former charge nurse from Cedars=Sinai is suing the surgeon who was caught on video physically assaulting her outside the OR suite. The surgeon,Kerry Kourosh Assil, even had the temerity to tell nurse Paula Rickey that he hit her because she “liked the abuse”.

What happens when nurses speak truth to power and call physicians out on abuse? Nurses this is our #MeToo moment. 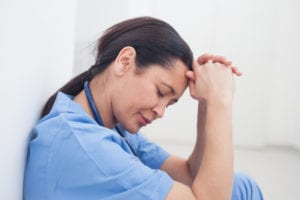 Unfortunately, Ms. Rickey feels that she was punished for reporting the attack to Human Resources. She was moved to a different unit so that she would not have to work directly with Assil, but he appears to have received only a a slap on the wrist. Rickey’s work hours were reduced while Assil’s did not change. While Cedars-Sinai issued a statement that the surgeon was disciplined accordingly, they have declined to describe the actual consequences faced by the doctor.

I wrote the following about power differentials in the aforementioned blog post:

Doctors — and especially surgeons — are generators of the lion’s share of income earned by medical facilities, and we can rest assured that Dr. Assil is no exception. Nurses’ work, on the other hand, is largely unbillable (with the exception of APRNs, of course). These facts alone belie an underlying power differential that goes far beyond levels of education and responsibility.

Surgeons bring in a lot of income, thus it is no surprise that Dr. Assil apparently suffered few or no real consequences for his egregious actions that can be clearly seen in the video referenced above.

In the cases of Harvey Weinstein, Roy Moore, Senator Al Franken, and other powerful men whose careers have been brought to an unceremonious end by allegations of sexual assault or misconduct, power eventually could not protect them against such reprehensible behavior. Perhaps because these men are public figures, it is actually easier to exact justice against them due to their celebrity status.

On the contrary, for surgeons (who are not exactly household names), there is less pressure to resign or lose an elevated professional position since it may be easier to keep such accusations under wraps.

However, in this case, the nurse in question has taken the courageous stance of speaking out and standing up for justice, and we can only hope that her lawsuit will have a chilling effect on hospitals and medical centers that feel they can overlook physicians’ aberrant behavior with impunity while blaming the victim and shirking their responsibility as employers.

Our Own #MeToo Moment

This is a historical moment in our country and the world. Powerful men are being brought down by women who are willing to speak out and stand up. Here’s another blog excerpt:

Nurses often feel disempowered in a healthcare system where doctors and surgeons are perceived as gods, while nurses are seen as their subservient handmaidens. In a professional setting where nurses are still approximately 90% female, the potential for abuse along gender lines is high. For nurses like Ms. Rickey, the consequences of speaking out and standing up for what’s right are often a frightening and disconcerting unknown.

In the spirit of the #MeToo movement, it’s time for nurses to stand up to physicians’ abuses of power, such as that displayed by Dr. Assil. There is deservedly plenty of literature about horizontal violence between nurses, yet we need to also see an equally significant body of literature regarding “vertical violence” perpetrated by doctors against nurses.

The moment for nurses to say “me too” has come. Abuse and violence in the workplace do not need to be sexual in nature to be worthy of our attention.

The sexual exploitation and abuse of women by men is generally viewed as a consequence of the aforementioned power differential and an overwhelmingly patriarchal system. Any form of violence — verbal, emotional, psychological, sexual, or physical — is unacceptable in every situation or environment.

Nurses, our “#MeToo” moment is here. It’s time for those who transgress against us to be held accountable for their actions, be they other nurses, surgeons, or doctors. In the words of Bob Marley, “get up, stand up — stand up for your rights.” The time is now.

Please consider becoming a patron of The Nurse Keith Show by pledging monthly support at my page on Patreon. With a pledge of as little as $5 per month or more, you can earn you some pretty cool premiums and benefits! Check it out, and thanks for your support!

The Nurse Keith Show is adroitly edited and produced by Tim Hallowell of The PodcastingGroup.com; social media and promotion are expertly handled by Mark Capispisan.